On the Gatsby Trail: Observations from the Film Trenches — Great Neck, Long Island

This week I was in Great Neck, Long Island filming for our Fitzgerald documentary. Kudos to the crew and to Alice Kasten, president of the Great Neck Historical Society, for spending the day in blistering heat, generously giving her time to show us her town.

Scott & Zelda lived in Great Neck in 1922 and 1923. From there he left for Paris where he wrote The Great Gatsby. The established thought about Gatsby is: West Egg is Great Neck and East Egg is Sands Point.

According to Alice, whenever the town reflects upon its history, it is naturally drawn to the 20’s and Gatsby–they even have a Gatsby Lane.

Our objective is not to debunk Great Neck’s impact on the Gatsby in this documentary, it’s about establishing Westport’s legitimacy in its contribution to what we find in Gatsby, as the writer Barbra Probst Solomon who grew up in Westport so eloquently accomplished with her 1996 New Yorker article. Unfortunately, that story failed to gain traction with the scholarly community.

Alice of Great Neck said, “I wasn’t even aware the Fitzgerald’s were in Westport.”

And so we are spending the summer digging into that era helping to flush out Ms. Solomon’s ideas through interviews (including a chat with Ms. Solomon!), archival footage and documents. I wouldn’t want to spoil what we’re finding at this point in the game, but I did want to share one insight.

I’m overwhelmed at the remarkable commitment people like Alice in Great Neck, and the folks here in Westport, who work at our historical society, and of course Ms. Solomon, all who are so passionate and committed to making sure we don’t forget our past.

This week Alice generously shared with us her personal collection of photographs, memorabilia and postcards dating back to the late 19th and early 20th century. It was an incredible portal into the world of yesteryear. 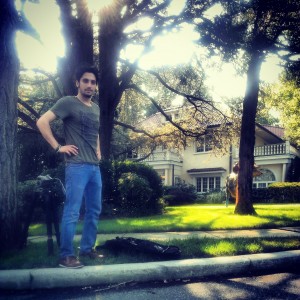 Another reason we’re doing this film is because last March I hosted a literary round-table with some of Westport’s artistic luminaries discussing life here dating back to the 20’s. What surprised me most is how little residents knew of our town. I believe Alice has experienced that same lack of awareness in Great Neck.

Both towns benefit from people like Alice, the caretakers of the past. Although George Santayana’s quote: Those who cannot remember the past are condemned to repeat it, is most often cited in the context of the Third Reich, being ignorant of the colorful characters who once populated a town, or as Fitzgerald so aptly captured in Gatsby, the fatal attraction to the glitz and power of wealth–could doom us to a bleak cultural landscape filled with McMansions and a preoccupation with reality television.

From what I’ve seen in both towns this summer, these women, with such passion for the past, deserve a greater voice, now more than ever.

Scott and Zelda zooming off from their 1920 summer home in Westport, CT.

In 1920, F. Scott Fitzgerald and Zelda summered in Westport. During their four month stay, The Great Gatsby was conceived, inspired by the locals, the mansions and the town.

The Great Gatsby: Westport, Connecticut tells the story of why some believe Westport was the source of much of what Fitzgerald conceived for one of America’s greatest novels.

Keir Dullea will narrate our film. Many other Westporters are making contributions and the project is for the Westport Historical Society.

We intend to talk to a variety of sources who have given much thought to this period in Fitzgerald’s life and we’ll see where it leads . . .

But at this time I would like to recognize Barbara Probst Solomon for her outstanding article on this very subject written for The New Yorker in 1996. The team is very excited about having the opportunity to interview her on film to learn more about her views on Fitzgerald’s time here. Her work provided the inspiration for all of us to want to know more.